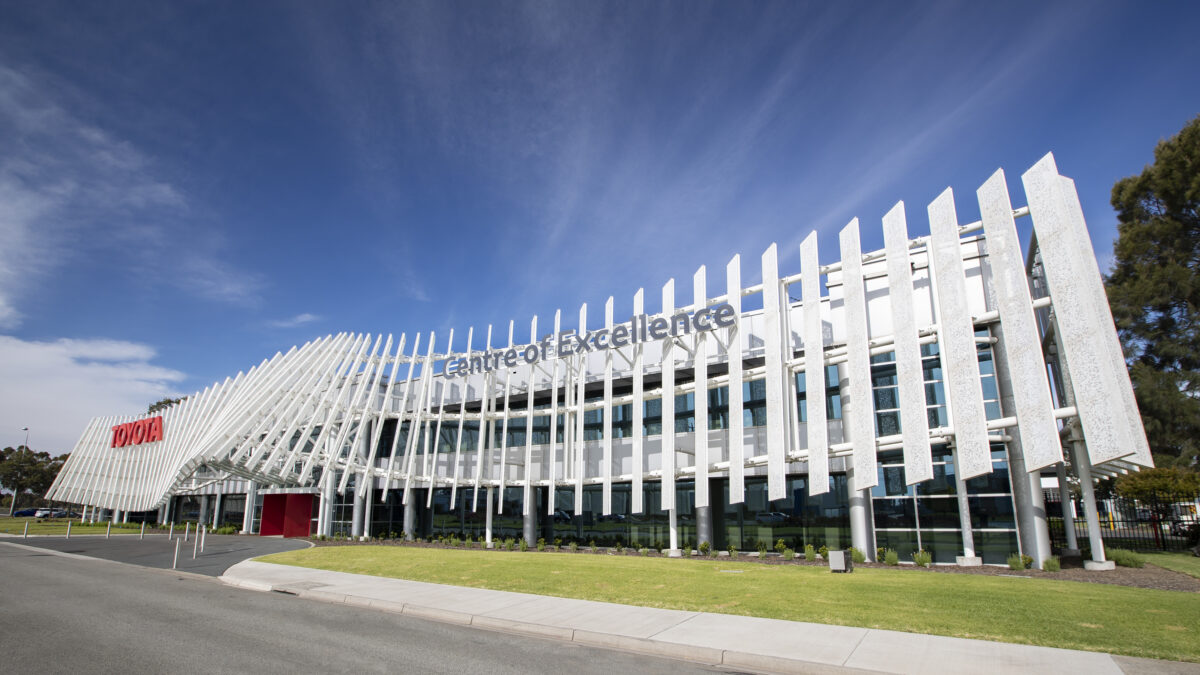 Toyota has opened its new $40 million Product Centre as part of the Toyota Centre of Excellence redevelopment of its former manufacturing site at Altona, Victoria.

Toyota Australia is continuing to invest in Australian innovation and expertise, opening a state-of-the-art Product Centre at its Centre of Excellence (CoE) facility in Altona, Victoria.

The new Product Centre brings together all of Toyota’s local planning, design, engineering and evaluation teams in the same facility, ensuring the world-class Australian teams will continue to design and develop unique products for the Australian and global markets.

These teams were behind such models as the HiLux Rugged X and HiLux Rogue. The new facility at the sprawling 22-hectare CoE will allow for an unmatched level of collaboration across departments.

“We’ve already seen what our planning and development teams are capable of, with vehicles like the HiLux Rugged X and HiLux Rogue proving to be popular here in Australia and creating accessories that are adopted in markets around the world,” Mr Rausa said.

“We wanted to retain and build on the capability developed during our long history of vehicle manufacturing, providing a highly collaborative environment that would allow Australian design and engineering expertise and know-how to be utilised within the broad Toyota family.

The Product Centre is housed inside the former powertrain manufacturing building that produced over 2.5 million locally built engines from 1978 to 2017, ensuring that Toyota’s positive impact on the local economy will continue.

It reflects the desire of Toyota Motor Company global president Akio Toyoda who stated that he wanted to leave a legacy at the Altona manufacturing site, and of former Toyota Australia President and Chairman Max Yasuda, who had a vision to create a centre that built better ways of working – with highly skilled people creating excellent products.

Toyota Australia Product Planning and Development General Manager Rod Ferguson said the new Product Centre would foster an environment that allowed Australia to spearhead exciting new projects for the local market and beyond.

“Our design and engineering teams are highly utilised by Toyota affiliates around the world, thanks to their exceptional ability to create products that resonate with customers across the globe,” Mr Ferguson said.

“Having previously been based at multiple facilities around Melbourne, consolidating the product teams on one site in a state-of-the art facility, alongside other TMCA business functions, will foster a level of collaboration that hasn’t been possible before.

“The new Toyota Product Centre ensures Toyota’s legacy of locally developed products will continue for decades to come,” he said.

Toyota has invested about $40 million for the construction of the Product Centre, forming part of the $150m overall investment in the CoE.

The CoE includes a Dealership Dojo that provides training and upskilling for dealership staff, a Centre of Education that can be used by schools, government and community groups to learn about sustainability and environmental responsibility.

The CoE also houses the industry-leading Hydrogen Centre and hydrogen production, storage and re-fuelling facility which will help in the creation of sustainable mobility solutions for all Australians, with the capacity to produce up to 80kg of hydrogen per day while serving as a commercial-grade refuelling outlet for commercial and passenger fuel cell electric vehicles (FCEVs).

The Hydrogen Centre also features servicing facilities for the Mirai FCEV and an education centre where visitors can learn about how hydrogen fuel works, and the benefits it can bring to wider society.

Product Centre teams will be able to make use of the 1.4km-long Autodrome test track facility, a valuable tool to help fine-tune vehicles for Australian roads and driving conditions.

The 55,000m2 Parts Centre houses 1.5 million parts and is capable of delivering 26,000 parts every day to dealerships.

The CoE now houses more than half of Toyota’s workforce including Guest First, People & Business Development and Aftersales (Parts & Accessories) bringing together employees from across Toyota Australia.

Going forward, the CoE will be used to help promote the future of mobility and connected technology for Toyota.

The CoE is built on the traditional land of the Boonwurrung people, and Toyota Australia pays its respects to its Elders, past, present and emerging.