The History of the Hybrid (plus some exciting news) So, what exactly is a hybrid vehicle, and what is so good about them? These are questions our team hear regularly, so we thought it was finally time we did something about it! We’ve got some serious hybrid experts right here at Torque Toyota, so why not pick their brains and put them to good use?

May we present you HYBRID MONTH. That’s right, throughout June we’ll be sharing a series of articles and content focussed on the technology, evolution and future of hybrid vehicles here in Australia. So, if you’re curious about hybrids and would like to learn more, you’re in the right place.

And want to know the best news? You’re invited to come and experience the latest and greatest in hybrid technology in the flesh at two special upcoming Torque Toyota events! But more on those soon.

First, let us tell you a little story.

A long time ago (24 years, to be precise) a futuristic car called the Toyota Prius came into this world. There were lots of ‘oohs’ and ‘aaahs’ when the Prius was born, because nobody had ever seen a vehicle quite like it. Fuel efficient? Check. Low emissions? Check. Compact? Check. Uncompromised driving performance? Surely not? Yep – Check. The Prius was the world’s first mass-produced hybrid vehicle, and it really had it all.

By the mid 1990’s Toyota had already made great technological strides in car safety, and now – approaching the 21st century – the Prius was their answer to tackling the issues of energy resources, global warming, and air pollution. Even then, people were yearning for ways to create a greener and more sustainable future – and the Prius was a game changer in that respect.

With the Prius, Toyota pioneered the development of the Toyota Hybrid System (THS), featuring a battery-powered electric motor that could operate the vehicle separately, or in combination with a fuel-efficient 1.5-litre internal combustion petrol engine. Incredibly, this system offered double the fuel efficiency of a conventional car, reduced CO2 emissions, improved drivability, and durability. You can find some more cool facts on the birth of the Prius here.

The technology has come a long way since then, but one thing hasn’t changed, and that is that Toyota are still market leaders when it comes to hybrids – with eight hybrid models in the range today.

Thanks to decades of progress and finessing the technology, today’s Toyota hybrid system is even more simple to use, and offers all the power and torque advantages of an electric vehicle. The perfect balance of maximum performance and economy!

Let’s take a trip down memory lane with some key milestones in the evolution of the hybrid: 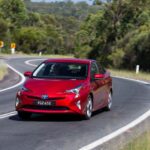 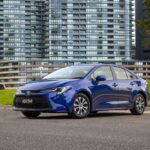 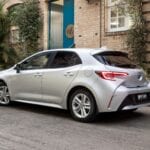 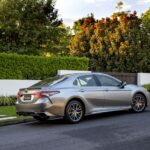 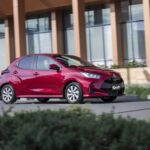 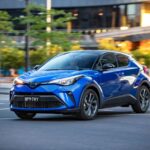 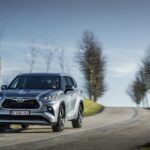 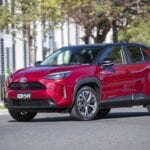 1997 – The world’s first mass-produced hybrid, the first-generation Toyota Prius, hit the Japanese market. The timing, in line with the signing of the Kyoto Protocol, put Toyota at the forefront of the global environmental movement. Recognised for its innovation and quality, it was named as Japan’s New Car of the Year and Overall Car of the Year.

2000 – Exports of the Prius began, and it became a hot property all over the world with people desperate to get their hands on one. Fun fact: Leonardo DiCaprio was one of the model’s most famous owners!

2003 – Toyota launched the second-generation Prius, boasting an all-new Toyota Hybrid System II― resulting in a 50% increase in power output for the electric motor, a boosted revolution speed with no alteration, and marked economy improvements.

2011 – The next generation Camry Hybrid was released, with a major facelift including a lighter, sleeker body style, and improved fuel economy. It is around this time that significant changes started being made to many of the hybrid vehicles.

2021 – Today in Australia, Toyota has eight models available in Hybrid: the Yaris, Yaris Cross, Corolla Hatch and Sedan, RAV4, Camry, C-HR, Prius, and just this month – the all-new Kluger, offering families all the space, comfort, refinement and versatility of a large SUV with a low environmental impact. Toyota hybrids are now so popular that if the RAV4 Hybrid were its own nameplate, it would have still surpassed the Mazda CX-5 and Hyundai Tucson as Australia’s most popular SUV for 2020.

Keen to learn more? Great news! We’ve got two upcoming events at Torque that we’d love to share with you:

The Kluger has had a hybrid upgrade, and you’re invited to check it out for a special late-night event!

The Toyota Cavalcade is coming to Torque

Learn all about hybrids from our team of experts, enjoy light refreshments, and the chance to win some great prizes! You’ll also have the opportunity to take one of our hybrid vehicles for a test drive.

In case you can’t tell, we’re passionate about hybrids, and we’d love to answer any questions you may have! Drop in or call and speak to our Toyota experts anytime to learn more.