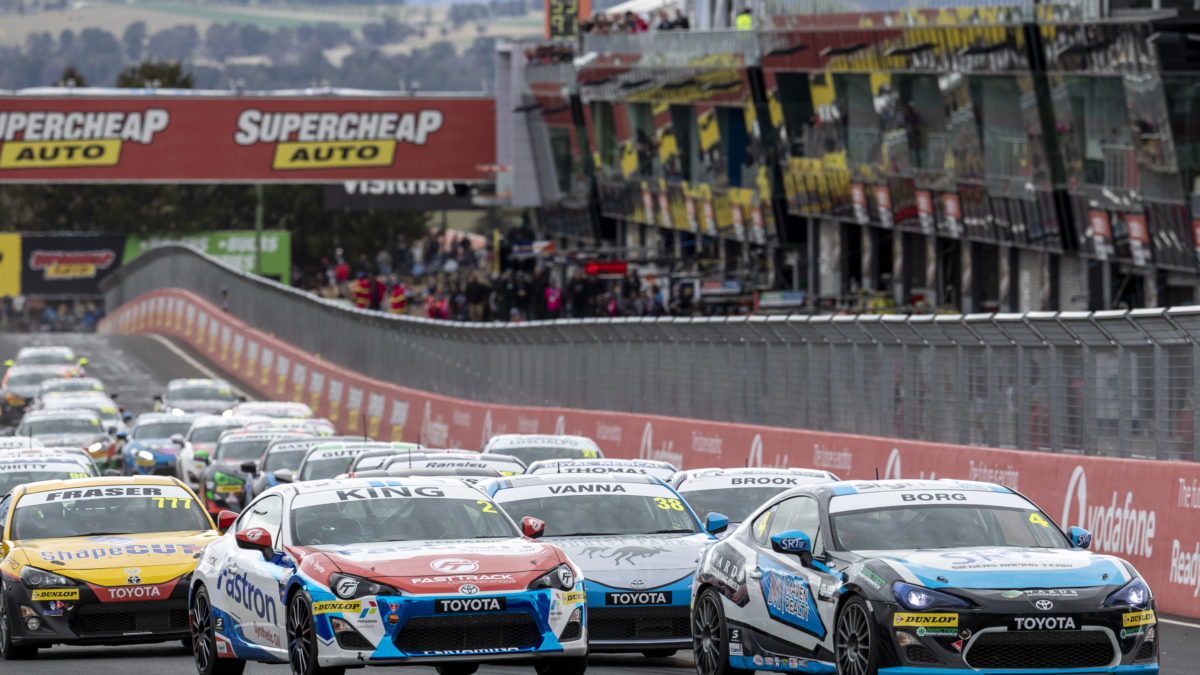 Aaron Borg took his first win in the Toyota 86 Racing Series in superb style, winning two of the three races at Bathurst over the weekend.

There was plenty of tight racing action and drama in the third round of the support category for the Supercars Championship, with series leader Tim Brook sliding into the wall at The Elbow, ending his race on Saturday afternoon on lap four and costing him valuable championship points.

In the same race, there was a heart-stopping moment as Peter Vodanovich charged into the back of the leading pack on the final lap resulting in a spectacular rollover with the car flipping end-to-end several times and coming to rest on its roof in the gravel trap.

Thanks to solid engineering of the cars and the full safety preparation by Neal Bates Motorsport – who first raced for Toyota at Bathurst 30 years ago – the young driver managed to walk away from the massive crash.

Bathurst is undoubtedly a challenging circuit but the skills of the drivers in the grassroots series shone through with some superb driving across the 34-car field.

In the first race on Saturday morning, Borg held the lead from start to finish. After qualifying on pole, he led through six laps of the iconic Mount Panorama circuit to take the chequered flag in 15 minutes 52.4190 seconds, just 0.2388 seconds ahead of Luke King.

Luke van Herwaarde completed the podium after smashing the three-year-old lap record by 1.6888 seconds with a time of 2 minutes 37.4873 on lap four of the race.

Speaking after the win, Borg said: ” We’ve worked hard between Townsville and now and all the hard work is starting to pay off. Anytime you can get to race around here is good but to get a pole and to get a win is just unreal.”But it was no easy ride for Borg, with a close wheel-to-wheel battle at the head of the race between the three podium finishers and fourth-placed Lachlan Gibbons, with only 1.13 seconds separating the top four as they crossed the line.

The drive of the race however had to go to 16-year-old Jaylyn Robotham in his first ever Bathurst outing. After qualifying in sixth, a penalty had him start at the back of the grid but determination and superb driving saw him gain 10 places on the first lap before climbing 19 by the end of the race to finish in 15th place.

Ben Grice and John Iafolla, who had both been in the top ten through much of the first race before contact resulted in Iafolla finishing in 27th and Grice sidelined after four laps, both charged through the field gaining 11 and seven places by lap two to eventually finish in 12th and 13th places respectively.

With Brook out on lap four, the leading pack of Borg, King, van Herwaarde, Fraser and Gibbons battled hard with the lead changing several times. Fraser sustained damage in contact and Gibbons clipped the wall going into The Dipper and both fell off the pace allowing Dylan Thomas and Jaden Ransley to move into the top five on the last lap.

In the end, it was King who raced away to cross the line six seconds ahead of Borg in second and van Herwaarde again taking the third podium place with Robotham having gained another nine places to finish in sixth.

King said it was a fantastic feeling to cross the line first at such an iconic track.

“It’s what we have been aiming for ever since we started this championship. Everyone wants to win at Bathurst and it’s a big championship gain for us so couldn’t be happier,” he said.

In the final race of weekend on Sunday morning, it was again King, Borg and van Herwaarde who battled for position at the head of the field with the lead swapping several times between the former two over the course of the first four laps.

Meanwhile a dedicated drive from Grice saw him catch the leaders and move into second place by lap five as van Herwaarde slipped to sixth. Borg charged on to take the chequered flag 1.5 seconds ahead of Grice in second with King in third.

The weekend’s three race results have caused a big shakeup of the leaderboard with only 78 points now separating the top five as the teams prepare for the next round at Sandown in Melbourne on November 8-10.

*All results are provisional

THE TOYOTA 86 RACING SERIES
The Toyota 86 Racing Series is designed to provide an entry point and training ground for up-and-coming drivers, offering a prize pool of $150,000.

Top-three place rewards for the year are $50,000, $30,000 and $15,000. The coveted Kaizen Award for continuous improvement now includes prizes valued up to $35,000 including a fully funded trip to compete in an overseas round of the 86 racing series.

Open to variants of Toyota’s cult-classic sports car, the series is part of the support program at selected rounds of the Virgin Australia Supercars Championship.

For regular updates and more information go to https://toyota.com.au/86/racing-series.