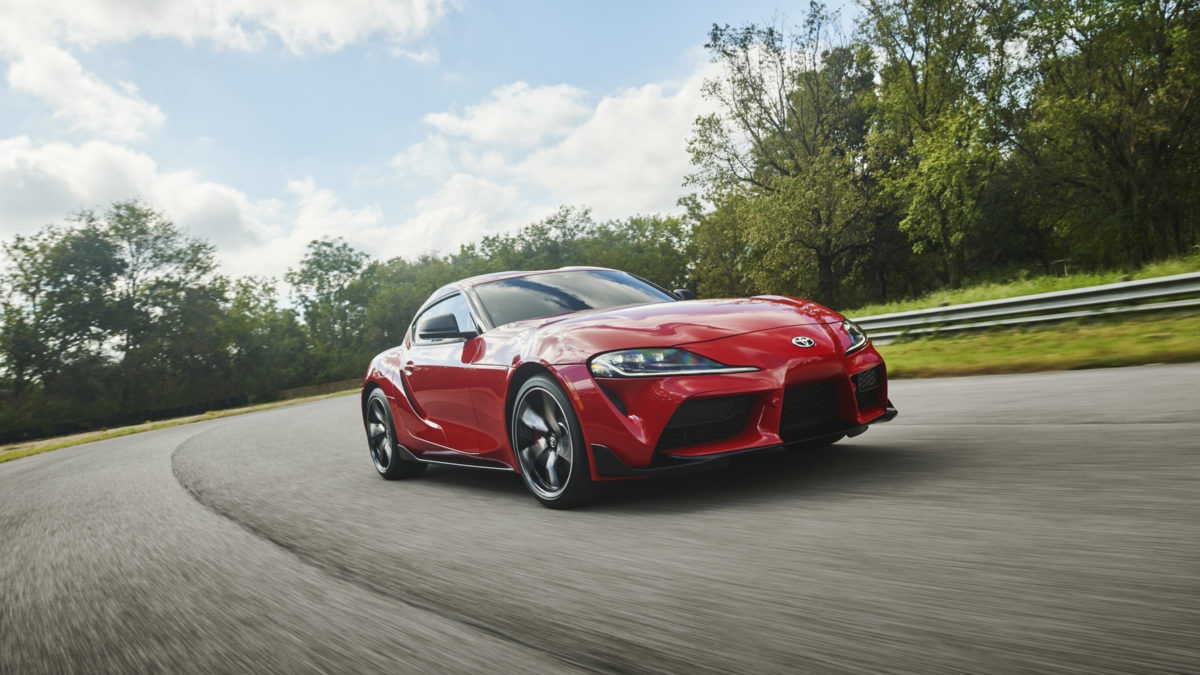 The all-new Toyota GR Supra, the fifth generation of Toyota’s legendary sports car and the first global GR model to be produced by Toyota GAZOO Racing, has made its world debut at the North American International Auto Show in Detroit.

Conceived as a sports car in its purest form, the new Toyota GR Supra builds on the heritage of Toyota’s past Supra generations and the 2000GT sports car with its classic layout of a front-mounted, straight-six engine driving the rear wheels.

Driving enthusiasts can look forward to an exhilarating blend of power, agility and precision handling, achieved thanks to the car’s combination of a short wheelbase and wide track, light weight, low centre of gravity and highly rigid body.

The 3.0-litre engine benefits from a twin-scroll turbocharger and produces 250kW and 500Nm of torque. Coupled to an eight-speed automatic transmission, it is characterised by smooth and powerful acceleration, with large amounts of torque available across the full range of engine speeds.

Toyota GAZOO Racing was instrumental in honing the new sports car’s performance, working extensively on the famous Nürburgring Nordschleife and surrounding roads in Germany in order to achieve the most agile, stable and rewarding handling. Further testing was also carried out on roads around the world, including in Australia with chief engineer Tetsuya Tada.

To be certain that the car delivered on its promise, Toyota president Akio Toyoda put it to the test at the Nürburgring in his role as a master driver before giving it the final green light.

Mr Toyoda said he had developed his craft as a master driver by spending countless hours driving an old Supra at the Nürburgring.

“Even though Toyota had no plans to make a new Supra, just like a lot of other diehard Supra fans around the world, I secretly wanted to make it happen,” he said.

“The new GR Supra was born through testing at Nürburgring, and I can honestly say that it is a car that is fun to drive and better than ever.”

In Australia, new Toyota GR Supra will be launched in late 2019 with approximately 300 cars available in the first 12 months. All vehicles will be built in Graz, Austria.

Pure sports car design
Toyota’s great sports car heritage is referenced in the design of the new Toyota GR Supra. The landmark 2000GT’s influence is evident in the long bonnet, compact body and double-bubble roof, while the distinctive look of the fourth generation Supra is captured with its muscular rear wings and the arc of the integrated spoiler.

Supra’s design theme was first previewed in the dramatic FT-1 concept car, styled by Toyota’s CALTY studio in California and revealed at the 2014 North American International Auto Show in Detroit.

Toyota Supra chief designer Nobuo Nakamura gave his team a simple brief around the concept of “Condensed Extreme”, ensuring they were free to express their vision of a pure and individual sports car in a truly original design.

Nakamura vision for an indisputably modern design that evoked the romance of classic sports car styling resulted in a car that approached the limits of what could be manufactured in higher volume, in particular the powerful curves of the rear wings.

In the finished design, the “Condensed” theme is evident in the relationship between the Toyota GR Supra’s large-diameter tyres, short wheelbase and overall length. The wheelbase is shorter than in the 86 coupe, and the tyres are larger.

“Extreme” is interpreted in the car’s wide stance, with tight cabin proportions and a wide track, contributing to a high level of manoeuvrability and stability.

The design was precisely calculated to achieve both optimum drag and lift characteristics, and an ideal front/rear weight balance.

The front styling was inspired by the fourth generation Supra, but has an even more expressive look with a low stance emphasised by a prominent central grille flanked by large air intakes that are essential for engine cooling.

In side view, the low bonnet generates a dynamic line that flows rearwards from the car’s low nose, while the back edge of the bonnet and the rear spoiler are set at almost the same height, linked by a low belt line.

The underbody has a slight forward angle while the cabin has a strong rearward slant, with blacked-out front pillars and character lines on the side of the roof emphasising the taut, compact cabin. Sharp-looking, sturdy sills express the car’s high rigidity.

At the rear, the arching lip spoiler has been optimised to suppress lift, while a trapezoidal shape to the rear bumper generates a sense of movement down and out towards the tyres.

Cockpit concept: putting the driver at the centre of the action
The driver’s cockpit in the new Toyota GR Supra neatly combines traditional GT elements with ultra-modern functionality. Designed to help the driver focus entirely on the business of driving, it is directly influenced by the layout found in single-seater race cars.

A low, slim horizontal dashboard maximises the forward view through the windscreen, helping the driver place the car with precision in high-speed driving. The principal controls are tightly grouped for quick and easy operation. The instrument panel, centre console and door trim combine in a seamless design that gives the cockpit a strong, unified feel.

The shape of the cockpit flows down into soft, supportive knee pads in the door trim and on the side of the centre console, their shape calculated with the benefit of Toyota GAZOO Racing’s circuit racing experience.

An asymmetric centre console marks a clear division between the enveloping driver’s cockpit and the more open passenger side of the Toyota GR Supra’s cabin.

The boot space is large enough for two people’s luggage for a weekend away and can be extended with a removable panel at the back of the cabin, creating enough space for a golf bag or all the personal kit needed for a track day.

Racing-inspired seats
The new Toyota GR Supra’s seats have a racing-influenced design that ensures comfort at all times and excellent support, in particular if the car is being used on-track. Body-holding side bolsters are featured on the cushion and the high back and there is an integrated head restraint.

Engine performance
The performance heart of the new Toyota GR Supra is its 3.0-litre in-line six-cylinder engine, producing up to 250kW and 500 Nm of torque. It is fitted with a twin-scroll turbocharger, high-precision direct fuel injection and continuously variable valve control that secure segment-leading torque performance from very low revs. The powerful, well-balanced, smooth and light revving engine delivers an exhilarating acceleration feel.

It is matched to an eight-speed automatic transmission that provides lightning-fast up and downshifts, with short ratios selected for the lower gears. The driver can take control of gear changes using paddle shifts on the steering wheel and can select Normal or Sport driving modes to suit their preference and the conditions.

A Launch Control function enables powerful acceleration from standstill with maximum traction, helping the car move from rest to 100 km/h in just 4.3 seconds.

The vehicle stability control has a special “track” setting that can be selected, reducing the level of system intervention so the driver has greater control of the vehicle’s dynamic performance.

A dedicated ECU monitors a wide range of inputs, including steering wheel, throttle and brake pedal operation, engine speed and yaw rate, for appropriate triggering of the actuator. 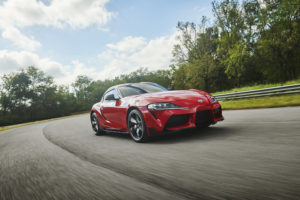 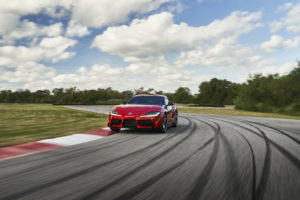 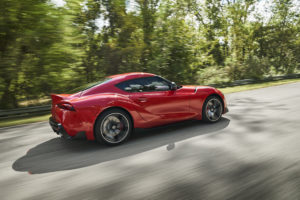 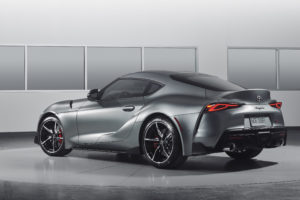 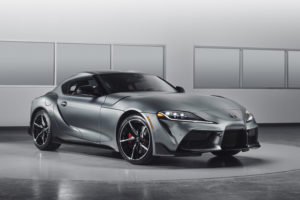 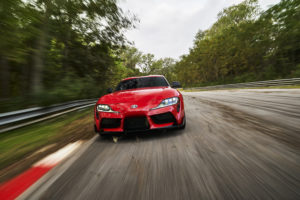 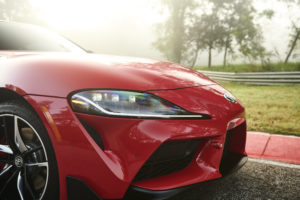 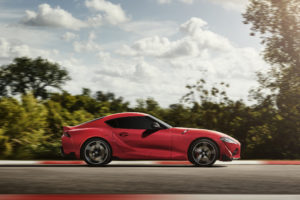 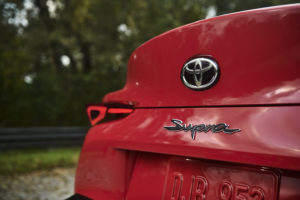 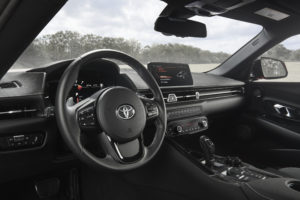 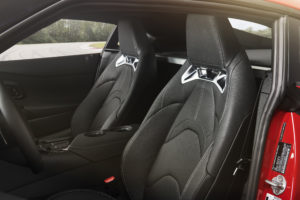 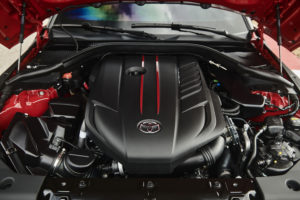 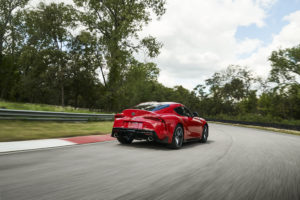 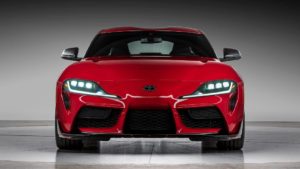 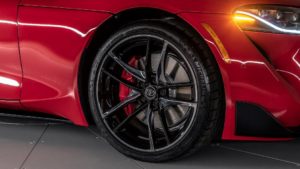