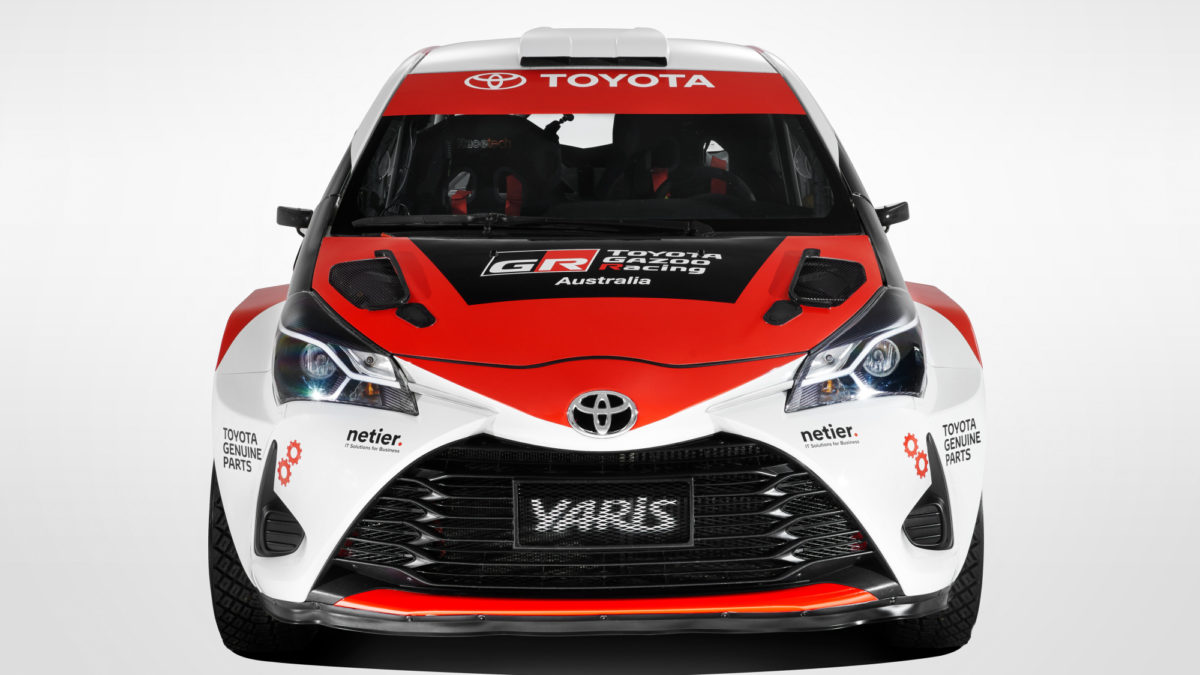 The new rally team will make its debut with leading Australian driver Harry Bates behind the wheel of the Yaris at Rally Australia in Coffs Harbour from November 15-18.

Next year, the factory-backed rally team will add a second Yaris AP4 driven by Lewis Bates with both cars competing in the 2019 Australian Rally Championship season.

“Toyota has always recognised the value of participating in motorsport as a means of developing ever more durable, reliable and exciting cars,” Mr Gabriel said.

“This is a philosophy that underpins Toyota GAZOO Racing that runs the global motorsports program – including the leading World Rally Championship team – which in turn, feeds into its development of our new sports and performance cars.

“Australians have long had an enthusiastic appetite for motorsport and performance cars and we are committed to delivering the excitement they offer through initiatives like the new rally team we are launching today.

“Harry Bates is a very talented driver who comes from Australian rallying royalty with his father, Neal, having won four Australian titles driving his legendary Celica GT-Four in the 1990s and then the Corolla S2000 in 2008.

“Now with the factory backing of Toyota GAZOO Racing Australia, we have no doubt Harry and Lewis will carry on the Bates family success.”

Both Harry and Lewis Bates have been competing in the 2018 ARC season with Harry in the Toyota Genuine Parts-sponsored Yaris and Lewis driving a Corolla S2000.

Going into the final ARC round at Rally Australia, Harry Bates is currently sitting second in the driver’s championship and is in contention for the drivers’ title, with Lewis in sixth place.

The new Toyota GAZOO Racing Australia rally team will be headed by Neal Bates and based in Canberra, running out of the premises of Neal Bates Motorsport.

Team principal Neal Bates said he was proud to have had a long and successful partnership with Toyota and was looking forward running the team under the Australian arm of the global Toyota GAZOO Racing brand.

“Our long history with Toyota in Australia has been a great one for me personally with its support helping myself and Coral Taylor, my long-term co driver, to four Australian titles,” Mr Bates said.

“I am immensely proud that Harry and Lewis can continue our very strong partnership with the brand and we as a team have the opportunity to run under the Toyota GAZOO Racing banner that is growing across the globe.”

Toyota GAZOO Racing was established by Toyota Motor Corporation in Japan in April 2015 as the unifying brand for all its motorsport activities including the World Rally Championship and Le Mans-winning World Endurance Championship teams.

In 2017, Toyota GAZOO Racing harnessed that experience gained through motorsport and added the GR product brand to develop sports cars and components for special edition models.

Toyota GAZOO Racing is active in a variety of motorsports around the world and takes the experience gained in racing to create cars and components for Toyota’s GR sports car brand.

While officially formed in April, 2015 to bring Toyota’s global motorsports activities under one brand, the history of Toyota GAZOO Racing really began in 2007.

Toyoda, together with a number of other Toyota employees, formed a team and purchased two second-hand Toyota Altezza RS200s from a Japanese dealership and modified the cars so they could enter the gruelling 24 Hours Nürburgring endurance race.

As an unofficial exercise, the team of eight non-professional racing drivers and a number of mechanics ran under the name GAZOO Racing and in its first outing, it saw both cars complete the full 24-hour race.

Spurred on by its achievement, GAZOO Racing has competed in the 24 Hours Nürburgring every year since.

In 2012, under the banner of Toyota Racing, Toyota took its renewed motorsport ambitions to a global level entering the inaugural FIA World Endurance Championship with two TS030 HYBRID sports cars making their debut at the 24 Hours of Le Mans.

Victory at Le Mans eluded the team but it completed the season with wins in the 6-hour races at San Paulo, Fuji and Shanghai.

By 2014, Toyota Racing was at the top of its game, winning both the manufacturers’ and drivers’ titles in the eight-round WEC that year.

With the success of the WEC HYBRID sports car, Toyota was determined and committed to again make motorsport a fundamental activity in its process to develop better cars – under one brand, with one goal.

Speaking at the Yamaha test circuit in 2016, Toyoda said: “In March 1952, my grandfather Kiichiro Toyoda said, ‘This is not mere curiosity. These motorsports are vital for the automobile business, for the automobile industry, and for making ever-better cars.’ These words were the starting point for Toyota’s motorsport activities. Last year, I made the decision to once again start the company’s motorsport activities afresh, again setting these words as our principle.”

Under the new banner of Toyota GAZOO Racing, Toyota continues to compete in the WEC and in 2017, re-entered the World Rally Championship with a three car team that had its first win that year in Rally Sweden, in only its second start.

In 2018, Toyota GAZOO Racing’s HYBRID sports car won the jewel in the WEC crown with a 1-2 finish at Le Mans and in the WRC season, Toyota is currently leading the manufacturers’ standings with all three drivers in the top five on the leaderboard.

What’s in a name?

The name GAZOO was conceived by current president Akio Toyoda about 20 years ago, with origins that were unrelated to motorsport.

At the time, Toyoda was a Toyota regional sales manager in Japan and together with a group of volunteers, developed an online photo sales system for second hand vehicles.

The idea was that cars being traded into dealers would be advertised online using just photographs before they went on display in dealerships with the aim of creating interest and reducing the lead times before they were resold.

With the internet in its infancy this was regarded as a radical idea in the mid-1990s and critics within Toyota claimed it would not work. As a result, it was not officially sanctioned by Toyota so the site was named GAZOO.com after the Japanese word for photograph or image – gazo.

When Toyoda and the team entered the 24 Hours Nürburgring in 2007, the unofficial nature of the entry made GAZOO the perfect name for the new racing team.